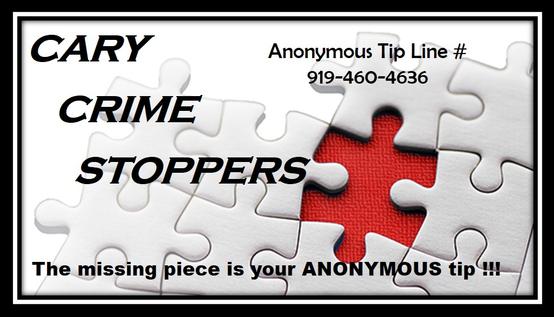 with the public, media, and Cary Police Department in solving crime in our community.  Cary

Crime Stoppers offers CA$H reward to persons who anonymously furnish information, via the

Tip Line, which leads to the arrest, or arrests, of criminal offenders in the the Town of Cary.

In addition, Cary Crime Stoppers collaborates with the community and citizens

to provide education and information about the program and organization.

Q. What is Cary Crime Stoppers?

Q.  How did Crime Stoppers begin?

A. Crime Stoppers began in Albuquerque, New Mexico in 1976. A university student was killed during the robbery of a petrol station. After weeks and weeks of investigation the police still had very few leads as to who was responsible.  Police Detective Greg MacAleese, of the Albuquerque Police Department, thought that if the public was able to observe a re-enactment of a crime on television this may lead to a citizen providing information that may lead to an arrest.  After seeing the re-enactment the police received a call from a local citizen, the information provided by the caller was enough to lead the police to the two men who were responsible. Within 72 hours of the re-enactment aired over the television the police had solved the murder. This was the beginning of Crime Stoppers.

Citizen tipsters who supply information leading to an arrest are eligible for a cash reward of up to$1,500.00, for certain crimes. At the time of the initial phone call, the tipster is given instructions on when to call back to check on the case. When the tipster does call back and if the information they provided resulted in an arrest, the tipster will be given information on how to collect the reward and still remain anonymous. No member of Cary Police Department or Cary Crime Stoppers will ever meet with the tipster.

Q. How are rewards are paid?

Area citizens have volunteered their time and formed a board of directors to oversee the Crime Stoppers program. This board approves the rewards to be paid, based on information about the case presented by the Police Coordinator at the monthly meeting and a criteria scale.

Once the board votes on and approves a reward and the tipster has called back to check on the case via the tip line, the Police Coordinator will instruct the tipster how to collect the reward via a specific bank procedure as well as the reward payout amount determined by the Board of Directors. Again, no member of Cary Police Department or Cary Crime Stoppers will ever meet with the tipster. No one ever knows the identity of the caller and the tipster does not produce any personal ID when collecting their cash reward at the bank.

A. Most people do not want to give out information to the police for several reasons:

1. They don't want to get involved.

3. There is an attitude of apathy.

5. They do not want to appear in court.

Cary Crime Stoppers has worked around these issues by offering callers a TIP LINE which allows tipsters to remain anonymous and also adds the incentive of offering tipsters a cash reward whenever the information provided leads to the arrest of criminal offenders involved in their tip.

Q. What kind of information is needed? Below are a few of the types of information that should be provided, if known.  If you know about any felony or misdemeanor crimes occurring in Cary, NC, we want you to be able to collect your reward so the information below if very helpful for law enforcement to be able to investigate and possibly make an arrest(s) in the case. Details are important in making sure the correct information is forwarded to the officers or detectives investigating the crime.

The more information provided the easier it is for the police department to make an arrest, which in return, makes the community safer.